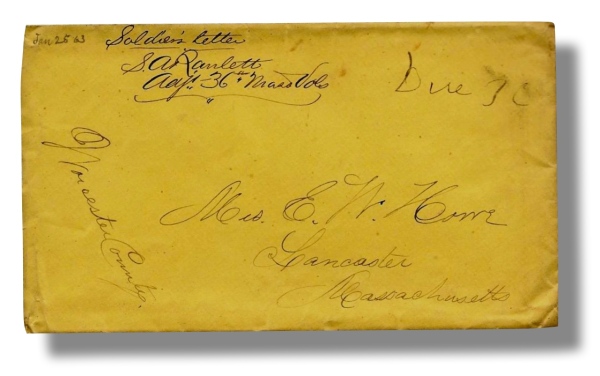 My dear Father and Mother,

I am so tired tonight that I do not feel like writing a very brilliant letter but in consideration of your anxiety to hear from me as often as possible, I will write you a few lines to let you know that I am well and still continue to work say and night at this hospital. I assure you that I am about ready to return to camp and pursue the regular routine of military duty. This “Fatigue Duty” as they call it is in reality what the name implies—fatigue duty.

Last Wednesday all the working parties with the exception of the 36th [Massachusetts], returned to their camps and as no new ones have come since, we have had to be on the jump day & night. On Thursday two boatloads of convalescents came here from Aquia Creek and we had to lead those that could walk, and carry their baggage. And those that were unable to walk we had to carry on stretchers. After the sick were cleared out the boat, we had to go around and pick up the dead and carry them on stretchers. Every day we have to search the camp and carry the dead to the burial ground. One day we buried thirteen. The next day nine. The next eighteen. So you see that it will not take a great while to get rid of the sick at this rate.

Every day we go to the landing and unload bedsteads, planks, joists, medicines &c. from the schooners. Then load the teams with them and cart them to the hospital where after unloading them, we have to distribute them to the different divisions. At four o’clock we go to supper and perhaps before we have it half ate, an order comes to fall in with axes and then we have to go to the woods and chop until dark in order that the sick may be supplied with fuel. All this work has to be—or rather is—done by eighty men. You can imagine how busy we are.

This morning early we went to the wharf and cleared two steamers of sick and wounded. We did not get through until half past three when we went to dinner. As soon as dinner was finished, we went to the woods and chopped until after six. I declare I was never as tired in my life as I am tonight. This carrying men on stretchers is the hardest work I ever found. By the way, I lead one man out the boat and who in the world should it be but Tom Baker. You remember him. He is a carpenter—a short thick-set fellow and lived in Clinton a long time. He belongs to the 11th New Hampshire Regiment. I scarcely knew him at first for he is all skin and bones, having had the dysentery. ¹

It has rained steadily for four days and the mud—well, you never see mud in Mass. But this does not hinder our working.

Tonight I go on guard at the cattle pen which is only a short distance from here. There are about 5,000 bullocks in it. There is a strong fence around them but when they start on a stampede, nothing can stand before them. Our orders are to keep them in the pen if possible but if not, to take care of ourselves. They have broken loose a number of times and the guard climb trees to save their lives. I have no time to write more now. I will write again just as soon as possible. It may not be for a week although we expect to go to to the regiment in a few days. Much love to all. Write soon. Yours truly, — Charley

¹ Private Tompkins P. Baker of Henniker, New Hampshire was 27 years old when he enlisted in Co. D, 11th New Hampshire Infantry, in August 1862. He died of dysentery at Aquia Creek, Virginia, on 7 February 1863—less than two weeks after Charley helped him off the transport boat. 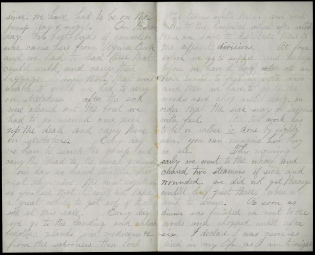