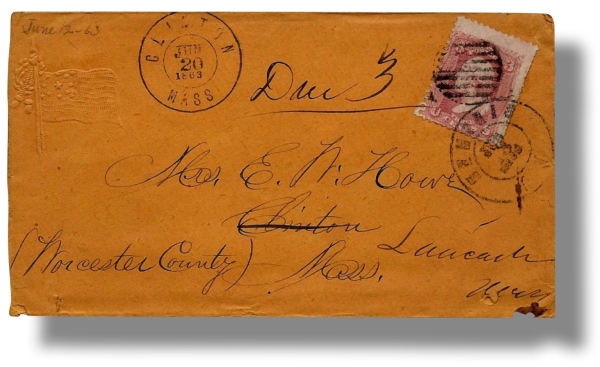 You are probably anxious to hear from me after my long silence and I am sure I cannot blame you, but I am in a great hurry and must make my letter as compact as possible. In my last letter I told you that we expected to move immediately. Well, at dark we started and marched till morning when we reached Jamestown, distance 23 miles. We had hardly stacked arms when pop, pop, went some muskets within a few rods of us. Looking around we spied our cavalry pickets making for the town as fast as possible, hotly pursued by rebel cavalry. Both were firing as often as convenient.

We jumped for our rifles, loaded, and double quicked into a field and formed into a line of battle whereupon the rebs scudded back into the woods. Skirmishers were sent out but they only succeeded in bringing in a few prisoners. All this was done before the troops around the town were fairly aroused and had it not been for our arrival at just that time, the town would have been burned and the whole force surprised. So much for the 36th Massachusetts.

Three regiments of Kentucky cavalry were then sent out but the rebs had recrossed the Cumberland only five minutes before they reached the bank. The river is 4 miles from the town. We have since learned that the rebel force was strong 3,000 cavalry. We stayed there that night and the next. I was then taken from the ranks and now cook for a mess of 3 captains and 3 lieutenants. I have given up my rifle and equipments that I have carried for ten months. Capt. Bailey and Lieut. Robinson are good officers and I think there is no doubt but what I shall stay with them as long as they hold offices.

The next noon we started and marched back to Columbia 23 miles next day. From there to Cambellsville 20 miles. Next day from there to Lebanon 21 miles. There I received a letter from Father which I have since answered. Next day took cars and reached Louisville at night (Sunday night). Here we were paid for two months. I did not send you any money this time for these reasons. I owed considerable for eatables, tobacco, &c. and had to buy a pair of shirts for five dollars, two pairs of socks for 75 cents, a hat and cord $2.50, some handkerchiefs and sundry other little things which tell on a fellow’s pocketbook. I am sorry that I cannot send any but you know that I would if I could and next time I will if I have to go without myself.

I did not find Mr. Cochrane in Louisville the next day. We took a ferry and crossed the river (Ohio) to Jeffersonville, Indiana. Then took cars on the Ohio and Mississippi Railroad and reached Washington, Illinois, some time the next day. We then shifted and took cars of the Illinois Central Railroad and after passing over some of the most beautiful farming country—mostly prairie land—we reached Cairo at night half past ten. [Cairo is] a miserable dirty city of 3,500 inhabitants.

Wednesday we took a steamer and reached this city—Memphis, Tennessee—last night. We had a pleasant trip down the Mississippi, passing by Columbus, Island No. 10, Forts Pillow and Randolph.

Memphis is quite a city and full of fortifications, but it’s a rough hole and a man with any principle whatever will keep clear of it. We are now waiting for further orders but all expect to go to Vicksburg. For my part, if we are to help Grant, I think we had better do it and not lay here doing nothing. “A Yankee is an ingenious fellow,” so the saying is. I believe it. Charley Howe thought he would like to eat and sleep in the cabin with the officers and he does so. He waits on the table for his board and thus saves two dollars a day or the alternative, sleeping outside the cabin and chawing hard tack. Bull for him, I say. Don’t you think I was lucky?

But I must close. I believe I did not acknowledge the receipt of your letter by Davidson. Very much obliged for the postage stamps and the money. I was in need of both.

Hoping I shall be able to get a mail soon, I remain with much love to you and the little chaps. Yours affectionately, — Charley

P. S. I will write as often as possible. I’ve got a good job and probably shall not get hurt in a fight unless I take a notion to go in one so you need have no fears for me. I am in good health and fat as butter.

Excuse such a scrawl of a letter. — Charley