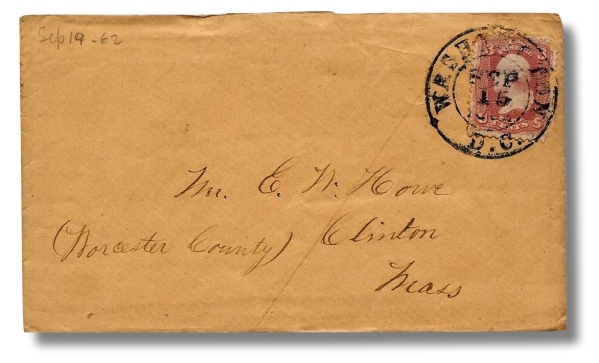 This is my fourth and perhaps my last letter. We were not called out yesterday as we expected, the skirmishing proving to be cavalry discharging their pieces. A messenger came to Col. Bowman today in great haste and the order has now been given out to cook three days rations and to be ready tomorrow morning in light marching order—that is, we are to take our blankets, overcoats, an extra pair of socks, an extra shirt with us, and to leave behind our knapsacks and extra baggage.

Thirty rounds of ammunition have been given us and the whole amounts to just this: that we have a long march before us and a fight not long afterward.

Some of the men wear a long, sober face. They think they realize what they have to go through. I don’t suppose I do. Neither do I wish to for I don’t want to be dreading events to come. I think I am as capable of enduring the hardships and dangers of a campaign as the best of them and if I am alive, I am confident that I shall see home at least by next July. This war cannot last six months longer. There are troops enough in and around Washington to wipe out all the rebels in Virginia. All are confident of success. Have no fears of the rebels ever getting Washington for it is too well fortified. The rebel Gen. Stonewall Jackson has won his last battle. He will be in Fort Warren ere many days—depend upon it.

But it is getting dark and I must be getting ready for tomorrow’s march. I am told some of the letters sent home by us are lost on the way now. This is the fourth letter I have sent you and you must write and let me know whether you have received them all or not.

Hoping you are all well and in good spirits, I remain your absent son, — Charles 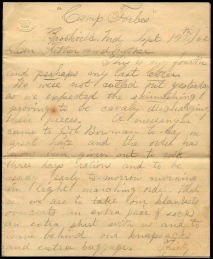 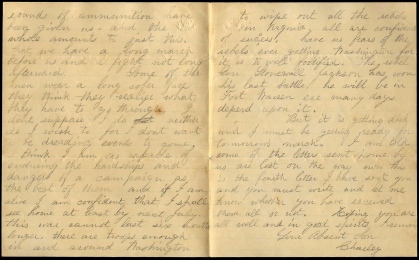