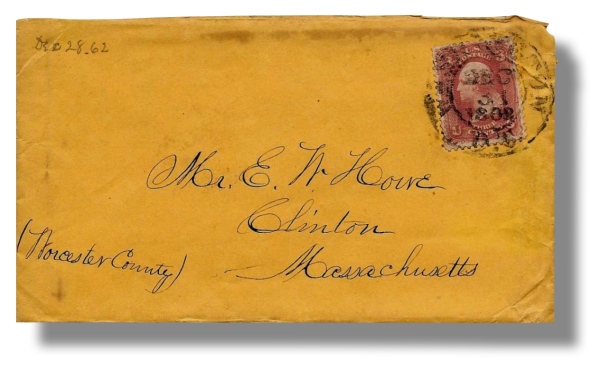 On the Rappahannock
December 28th 1862

Yours of the 21st came to hand yesterday. Glad to hear that you were well and enjoying yourselves around a rousing coal fire. I suppose you need one to keep comfortable. We are having beautiful weather—rather chilly in the morning and evening but quite warm during the day. The old soldiers tell us that we have seen the coldest weather already and that last winter was not near so cold as this has been. I calculate that next month will bring mud enough for us.

At nine o’clock this morning our regiment left camp and started for picket duty on the river and here we are. Our company with two others are held as reserve about a half mile back of the outpost and the only orders we have had were to make ourselves comfortable.

Fredericksburg is in plain sight. The inhabitants returned to their shattered dwellings after the fight and now the church bells are pealing forth their “melodious strains” (Shakespeare) calling them to church where probably we will be cursed and damned with a vengeance. I don’t know why it is, but this is the first Sunday that has seemed to me like a Sabbath. Everything is calm and lovely. The boys all appear to be in a deep study and scarcely a word has been spoken since the church bells began ringing. Probably they are comparing in their minds the prayers that will be offered up within pistol shot of here with those that the people at home are undoubtedly offering. I reckon there will be some difference.

In your letter you seem to have a very poor opinion of me to suppose that I have been all this time with but one shirt and pair of socks. In the first place, those Maryland marches were tedious and one would not want to carry too much of a load on his back, and if I had not had the chance to send those things home, I should have thrown them away. Others threw away plates, knives, & forks, dippers, and everything that they could possibly get along without. I used to wash me all over two or three times a week and my short as often as it needed it. When at Pleasant Valley I drew new socks, drawers, and a short. These I lost at Lovettsville with my blankets. At Waterford I drew another shirt, pair of drawers, and socks but no blanket. At this place a blanket, and a few days ago, I drew 2 new shirts, 2 pair of drawers, 2 pair socks, 1 pair pants, and threw away my old ones and donned my new ones. So you see I am comfortably clothed and as yet free from lice. If possible, I shall keep so. We are allowed $42,00 worth of clothing a year. If we don’t draw that amount, the balance is paid us but I am bound to keep clean and warm if it costs a hundred.

Mr. Holbrook has not arrived yet. I am anxiously awaiting him. You need not send any clothing to me except what you have sent by him. As for your box and Jerome’s, you need not send them at all if it’s so terribly cold, but 150 boxes came here last week and nearly all had fruit in them which was in good condition. Some had grape and currant, wine, cake and mince pies.

You enquired in one letter if Captain H[astings] had been stealing the men’s rations. I won’t say he stole them but he lived on our rations all through Maryland and in Virginia until we reached Hungry Hollow when one man went to the Colonel about it and told him how it was. Col. [Henry Bowman] reprimanded Capt. [Hastings] and there has been a devilish row in the company ever since. Captain [Hastings] is trying to clear himself but he can’t do it. When we were at Antietam, he took half a box of hard tack and swapped it to a nigger for bread which he made way with himself and not a speck did the men get. I don’t know as you would call that stealing (or much of anything else).

Oliver Sawyer of Berlin is the man that complained and the Captain has been trying to put him through but Col. [Bowman] says every private shall have his rights and than an officer has no business to touch the mens rations for they are allowed $1.20 per day to buy rations with so the “more he moves, the worse he stinks.”  “The higher he climbs, the more he shows his ass,” as you sometimes say. I don’t blame the captain for trying to clear himself for it looks mighty small.

As for Lieut. [William F.] Brigham, he so far has treated us like gentlemen. He is very liberal and the men like him very much.

I tell you what it is, Nat ¹ and I have got a cozy hut—plenty of room and a fireplace of sods in one end. The fireplace & chimney completely block up one end of the tent and the other end is shut up with logs piled up one top another in cabin style. A small square hole is where we crawl in and out as a dog from a kennel. We have a gay old time.

Sometimes when Nat goes to get in, I get behind him and plant my foot on his base of supplies in a manner that sends him sprawling. We can sit up in the tent and toast shins and keep as warm as you with all your nineteen dollar stoves.

I forget whether I told you about my visit to a hospital after the fight. Well the first sight that met my eyes was a man stretched on a table and the doctors were taking off his leg. Beside the table was a lot of legs and arms piled up cob-house fashion. Presently two men came with a box and commenced throwing them into it. Not succeeding in getting all in, he planted his foot on them and stomped and crowded until he made room enough and then flung the rest after which he went and buried them.

You have heard that “the ruling passion is strong in death.” ² Well, I believe it. I was talking with a man wounded in the hand and hip seriously and says he to me, “We couldn’t lick the damn cusses no more than hell’s froze over. Why,” says he, “them cussed batteries are thicker than fiddlers in hell.” Well, thought I, if a man in your condition can keep up pluck, the ruling passion is strong in death.

Enclosed find a piece of clam shell which I picked up on the beach of the river. It’s the only kind of shell the river affords except a few James projectiles.

But I must now close for I think of nothing more to write. Write soon and tell me how matters and things are in Clinton. Hoping you are all well. I remain as usual, — Charley

¹ “Nat” was Nathaniel J. Houghton of Clinton, Massachusetts. He enlisted at the age of 18 in August 1862 and was discharged in June 1865 at the end of three years service. He and Oliver Sawyer served as the musicians of Co I.

² The expression come from Alexander Pope, Moral Essays (1731-35), Epistle, line 174, “And you, brave Cobham! to the latest breath, Shall feel your ruling passion strong in death.” 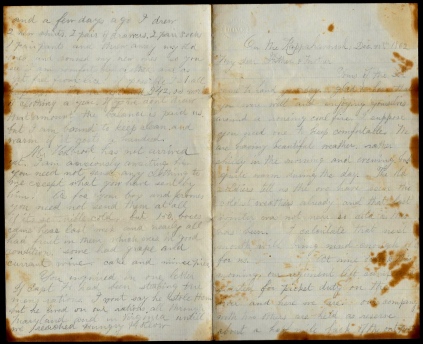 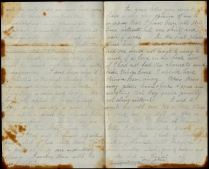 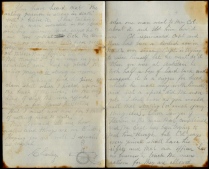 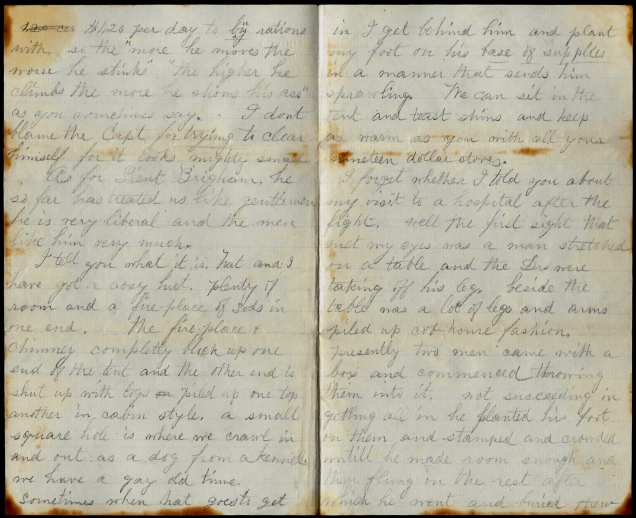 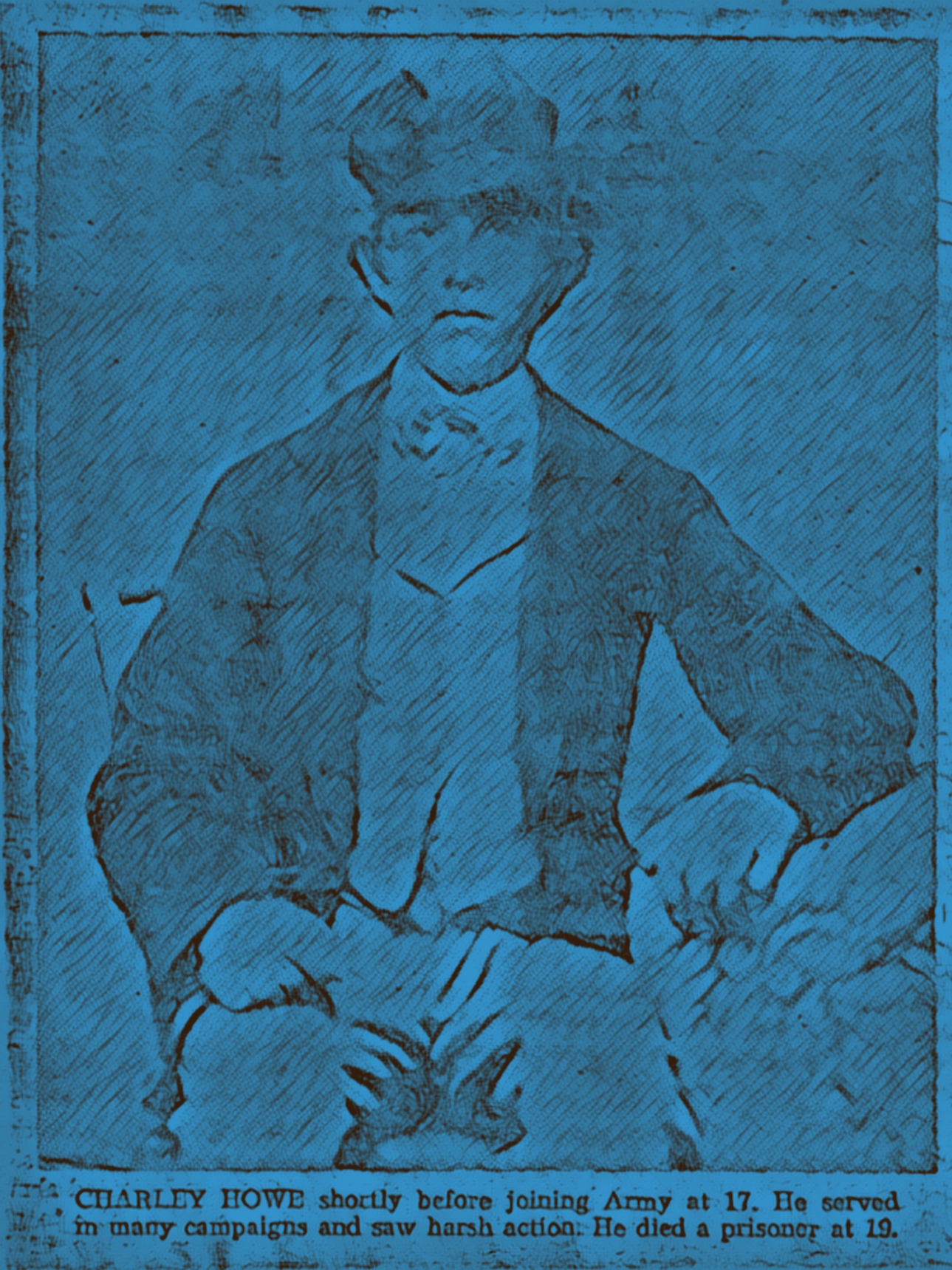