It is so long since I last wrote you that I am almost ashamed to do so now. But as your letters of the 12th, 21st, & 20th are at hand, I feel it my duty to answer them and let you know, at least, that I am alive and well, entirely free from the difficulty that gave me so much trouble.

To give you an account of my travel since I last wrote would require more patience and paper than I have on hand at present. But mother has my diary which gives the whole account and you no doubt have already seen some portion of it. You of course will excuse me for not sending it direct to you for I have not time to copy it more than once and what I send to her is as much for you as anyone else.

Last Saturday (10th) there was an engagement at “Blue Springs” in which our regiment took a part. We made two charges and in each one drove the graybacks more than half a mile. The fight lasted from three o’clock until dark. The next day the rebs skedaddled. Col. [Arthur A.] Goodell and Lts. [Henry S.] Robinson and [P. Marion] Holmes and several others were wounded but none were killed out of the 36th. Your humble servant came out all right without a scratch and hopes he will always have the same good luck.

In regard to coming home, I think my chances are pretty slim. Here we are nearly two hundred miles from any railroad that will take me north and should I get a furlough, I would have to walk from here to Nicholasville, Ky. which would take the best part of a fortnight to do. As for getting discharged, that cannot be for even should I pretend the worst kind of sickness, my looks would belie me. The fact is there has been so many sick and lame ones discharged that recover immediately upon getting out of the service that the thing is “played out”—especially in this outlandish part of country.

I am still form in my belief that the country needs all the men that can be scraped together for the rebs are going to fight for some time yet. They may be getting short of provisions” but that’s the story we have heard ever since the war began. But I agree with you that it would look better for some of these good, able-bodied loafers at home to turnout than to make the boys (who compose the largest part of the army) do all the work.

I do not doubt your story that work is driving. (I would like to be earning better pay than what I now am) but I fear that there is the one great trouble—i.e., people are so absorbed in business affairs and money making that they pay no thought to the danger the country is in. Just so long as there is the slightest chance for these manufacturers to make poor articles for the soldier and receive good pay just so long will the war continue. I hope to God that the draft will be rigidly enforced. A draft that will bring out the men and not the $300. Then things would wear a different aspect.

You may think hard of me that I send home none of my money but were you out here and see how little the government furnishes us to eat and what exorbitant prices er pay for what we buy, you’d say nothing. Cold weather has set in and I bought me a vest for which I paid $5.00. My blouse was completely torn off me in the woods at Blue Springs and as it would be some time before I could draw one, I bought one of a person who had two. My money is now all gone but I am still in need of a pair of boots, and article that U. S. don’t furnish/

We are allowed $42.00 worth of clothing a year. If we draw more, it is taken from our wages. If we draw less, the balance is paid us. Last year I owed the government nearly $5.00 but if I keep on this year as I have begun, they will owe me three times that amount at next settlement.

I wish of you can spare the money, you would buy me a good gold pen—a limber one but not too much so, Mine is lost and I find it hard work to write with a steel pen for they are continually scratching. If you will get me one and send in a letter or box, letting me know the price, I will make it all right with you next payday. But I am getting lengthy and will close, thanking you for the stamps and hoping you are well and contented. 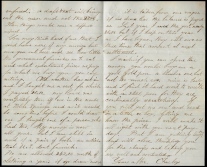